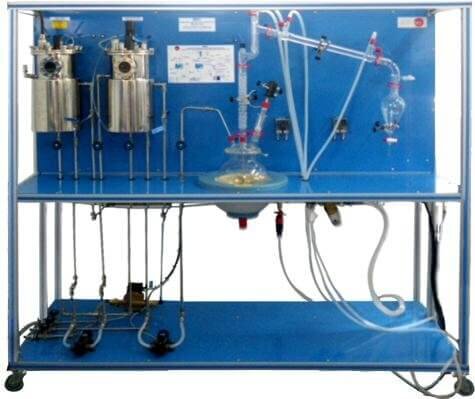 In the past, fossil fuels were used essentially for transportation, relying on the abundant and less expensive petroleum supply by then. But in last few decades, due to the increasingly expensive petroleum supply, there has been considerable interest in the development of fuels generated from renewable resources, that is to say, biofuels. The term biofuel is attributed to any alternative fuel that derives from organic material, such as energy crops (corn, sugar, sorghum and fruits among others), crop residues or waste biomass. Among all biofuels, ethanol has been trusted as an alternate fuel for the future, being already produced on a great scale worldwide. In this sense, bioethanol is expected to be one of the dominating renewable biofuels in the transport sector within the coming years. The Bioethanol Process Unit “EBEB” has been designed to perform a wide range of didactic experiments. Various processes, such as mashing, fermentation and distillation, can be studied.

The Computer Controlled Bioethanol Process Unit “EBEC” has been designed to study and control the bioethanol production process on a laboratory scale. This unit allows to monitor and examine all the important processes, from liquefaction and saccharification of the raw materials to the conversion of sugar into ethanol and distillation.

The mash tank includes an inlet at its upper cover for filling water, starch and enzymes. Its base is slightly inclined towards a port for draining the solution or pumping it into the fermentation tank. During the mashing process the starch of the raw materials is turned into glucose. The addition of the alpha-amylase enzyme enables the liquefaction of the starch slurry. Subsequently, saccharification starts by adding the glucoamylase enzyme. A temperature sensor and a pH sensor measure the properties of the mixture in the tank. The pH value is adjusted by adding acid and base, solutions, with an acid/base circuit system. After saccharification the mash is pumped into the fermentation tank.

The fermentation tank base is inclined slightly towards a port for draining the solution or pumping it into the distillation unit. The fermentation process takes place after adding yeast, producing ethanol and CO . A 2 temperature sensor and a CO sensor measure the properties of the mixture and the concentration of CO in the tank. Both tanks are heated indirectly with hot water through a jacket and stirred constantly. Besides, they are equipped with a sight glass so that the processes can be observed and monitored. Two temperature sensors, located at the outlet of the tanks' jacket, work with the PID controller to maintain the desired temperature inside.

The mash tank and the fermentation tank are thermally controlled by hot water, which is heated by a system consisting of a thermostatic bath and a pump. An additional temperature sensor is located in the thermostatic bath. After the fermentation process, the preparation is pumped into the distillation unit. It contains a heating mantle, a stirrer, a distillation column, a cold finger (dephlegmator), a condenser and a decanting funnel. Four temperature sensors additional are located at different points of the
distillation unit.

With this unit there are several options and possibilities:

5. Cables and Accessories, for normal operation.

a) Technical and Vocational Education configuration

This complete software package consists of an Instructor Software (EDIBON Classroom Manager -ECM-SOF) totally integrated with the Student Software (EDIBON Student Labsoft -ESL-SOF). Both are interconnected so that the teacher knows at any moment what is the theoretical and practical knowledge of the students.

Faults Simulation System (FSS) is a Software package that simulates several faults in any EDIBON Computer Controlled Unit.
The "FAULTS" mode consists in causing several faults in the unit normal operation. The student must find them and solve them.
There are several kinds of faults that can be grouped in the following sections: 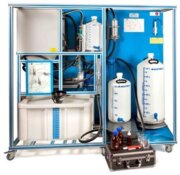 Computer Controlled Biomass Process Unit
The main element of the unit is the biomass boiler, which will heat the water that will flow through
Bioenergy
Content languages
English , Spanish
Add to quotation list